After a year as video editor for DHX, I was promoted to episodic director for the animated series Wishenpoof for Amazon Prime Video.

A year after premiering at the red carpet Showcase Gala for the Atlantic Film Festival, Una forma de partir / A Way to Go, a short that my producer and I received close to $30,000 to shoot, is airing on CBC's Reel East Coast. More news to come on film festivals and more with this little short whose not-so-humble beginnings started as a finalist script in a Vancouver screenwriting competition. 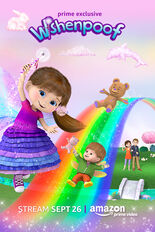